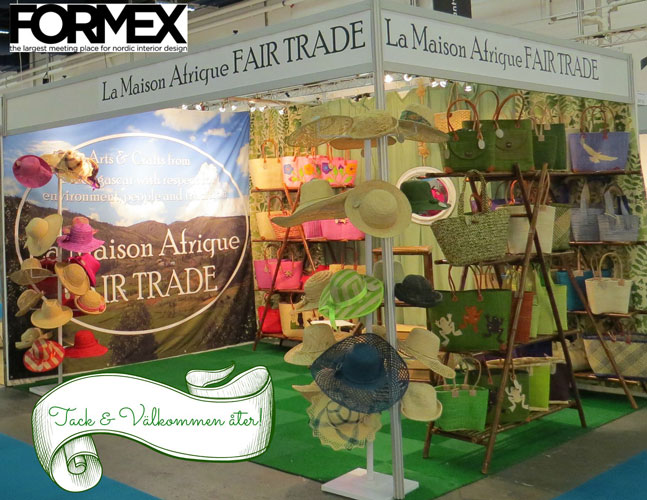 Fair Trade bag with large pocket for e.g. mobile. The pocket closes with Velcro (the button of polished coconut shell is there for aesthetic reason). Cotton textile with drawstring to close the bag. Double sewn leather handles with extra length to carry on the shoulder. Genuine handicraft of locally sourced environmentally friendly materials.

The bag has inside of plaited reeds. The material gives shape and elastic, flexible firmness, good durability. The bag has outside of sundried, handwoven raffia palm leaves. Before weaving, the palmleaves are split lengthwise and tied together. The weaving gives important economic income to women in isolated rural areas. The dyes used complies with environmental and health demands. The leather for handles and trimmings has been tanned with mimosa and is free from chrome. The button of polished coconut shell – is a little bit of waste that in the hands of a skilled artisan has become beautiful.

Remains to add yet a practical detail of the bag: A sturdy inside pocket fixed at the inner topline on the bag, protected under the cotton textile drawstring close.
The bag is available in three sizes: Art nr 241010: Height=33cm, Art nr 241011: H=29cm, Art nr 241012: H=24cm Colours: Olive green, jeans blue Click here to find these and other bags in the assortment.

1995-2015: La Maison Afrique FAIR TRADE celebrates 20 years of: Arts & Crafts from Madagascar with respect for environment, people and traditions. FAIR TRADE - by presenting extra many new bags and hats in the assortment.
See bags and hats in La Maison Afrique FAIR TRADE stand B09:41 at Formex, Stockholm international fairs 19-22 August 2015
or on the website, there also craft methods, artisans and materials are presented.

Fair Trade bags: Bags that are nice to carry. Quality crafts of natural fibres and vegetable tanned leather. Sizes and functions for autumn's many activities – order for immediate delivery to your shop.

Fair Trade hats: Hats with style and function. See the many new hat models plaited, crochet or woven of raffia palmleaves, sisal, various reeds or grass – and plan for a new sunny spring. 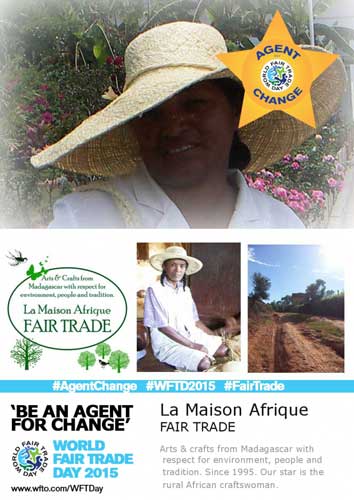 Put on a hat! – This is a day for head issues: Fair and Sustainable World.

Our star is the rural African craftswoman
making hats and bags using local, renewable natural fibres.
Creating economic growth where it is most needed.
Sustainable development - she just does it.
On photo top: Mme Raton, on photo below Mme Odette – and the mud road leading to their house. More about them

Result of work on product development during autumn, followed by a lot of crafting. A container loaded with bags and hats. From harbour on Madagascar end of February – arrived to Gothenburg 22nd of April 2015.

1995-2015: La Maison Afrique FAIR TRADE celebrates 20 years of:
Arts & Crafts from Madagascar with respect for environment, people and tradition FAIR TRADE
– by presenting extra many hats and bags in the assortment. 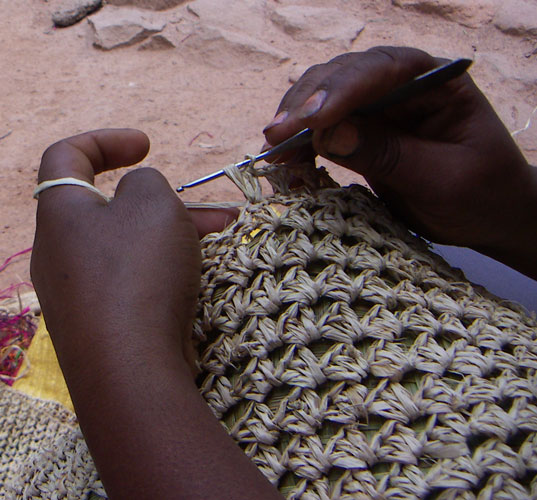 In an article the 21 March 2015, La Gazette writes about the big importance handicraft has for the national economy; Crafts contribute with ca 12% to Madagascar GNI (Gross National Income), which is more than the contribution from the industrial sector's 8%.

In addition, crafts fight poverty in urban as well as rural areas – and it makes use of a variety of local raw materials to make high quality products.

The article points at the need to know more in order to make better use of the craft sector as a national recourse – and to tackle problems.

In 2002, INSTAT, Institute National de la Statistique de Madagascar made a study of the craft sector. The study was comprehensive, its results well worth reading- and it was well in line with the article 2015 in La Gazette. The report from the study is available from INSTAT website. 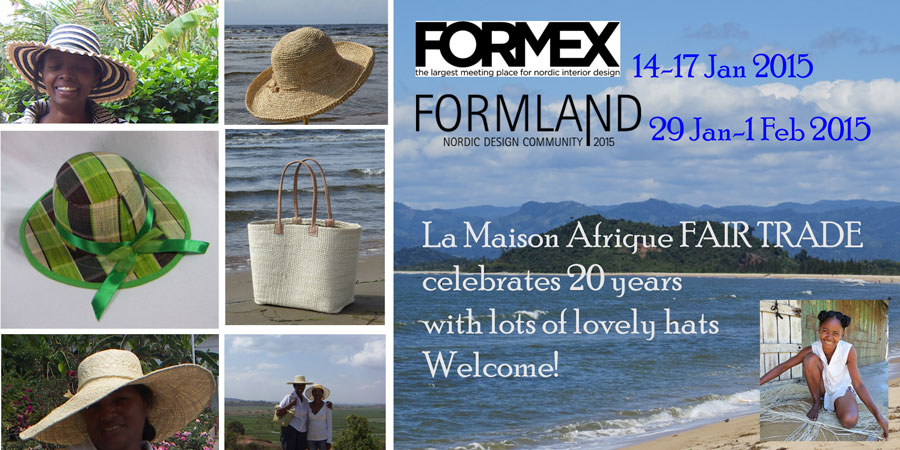 La Maison Afrique FAIR TRADE is a Fair Trade organization supporting and cooperating with artisans on Madagascar since 1995. Raison d'être is summarized in the logo "Arts & Crafts from Madagascar with respect for environment, people and tradition. FAIR TRADE". We celebrate the 20 years. Welcome!

The World Bank reports on the political-economic situation in Madagascar

In "Madagascar Overview", dated May 12, 2014 the World Bank summarizes the political and economic situation in Madagascar. Describes a country that, after 4 years of political crisis, now is one of the worlds poorest people (82.4% living on less than $ 1.25 / day). GDP growth that in 2013 was mainly based on mineral extraction and insufficient to compensate for population growth.
Madagascar is very vulnerable to natural disasters; cyclones, droughts and floods. A quarter of its population living in high risk areas. In 2008, cyclones caused economic losses equivalent to 4% of GDP.

In-depth description and analysis: "Faces of Poverty in Madagascar 'March 2014.

Photo: The report "Faces of Poverty in Madagascar" defines young children as the poorest in the population. This generation is faced with the task of managing (and perhaps it should be written; defend) the nature and culture of their country. The children on the photo can represent the many who share a major challenge.